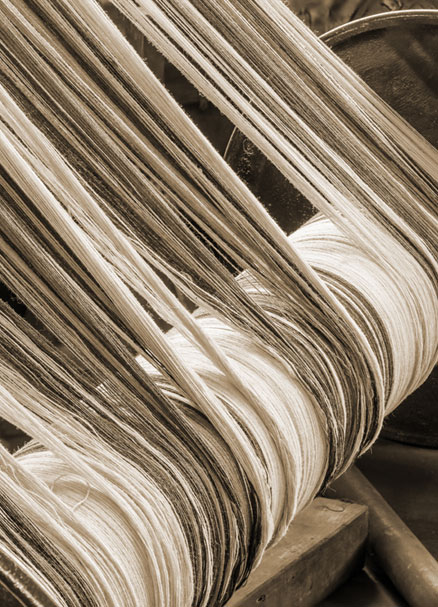 In Ireland, the earliest of woven material dates from about 1600 B.C., as pottery from that period shows signs of woven material in which the clay was placed before firing. A fragment of cloth in the National Museum, found in a bog in County Antrim, is dated from at least 700 B.C.

If you visit the National Museum of Ireland today, you can even see a woven piece of fabric that was found in Co. Antrim and dates back nearly 3,000 years. However, more recent evidence pointing to the importance of weaving in the everyday lives of the Irish can be seen in the early medieval decrees known as “Brehon Law”. This stated that in the case of divorce, a woman was entitled to her fair share of the weaving tools and wool products that she had spun during the marriage.

The use of wool in Ireland normally took place on farms where the producer had access to their own flock of sheep, whose fleece could be sheared to provide the wool needed for yarn.

However, before the wool could be used to make actual fabric, it had to undergo several treatments. Back then chemical dyes had yet to be invented, so natural colourants such as vegetable dyes, blackberries, and nettles were used to give wool an interesting tint.

The wool then had to be smoothed and untangled, which was done using what is called “hand cards”. These looked a bit like a pair of flat hairbrushes which the fleece was worked between to get it ready for spinning.

Once a sheep’s clean fleece had passed through the spinning wheel, it came out looking much more like what we would expect of wool – in nice thick threads known as yarn. These would then be fed into a loom – which warps the threads at right angles in order to weave them together into a cloth or tapestry.

Despite its deep roots in Irish heritage and popularity today, weaving, unfortunately, hasn’t been a continuous success story in Ireland. Initially, Ireland was exporting products to Britain and beyond, but in 1699 England introduced a new act of Parliament entitled: “An Act to prevent the exportation of wool out of the kingdoms of Ireland and England into foreign parts and for the encouragement of the woolen manufacturers in the kingdom of England.” This prohibition of Irish exportation on woolen products nearly crushed an industry that had been internationally flourishing since the 13th Century and was not repealed until 1867.

In this time, the art of Ireland’s handwoven culture had nearly died out, due to the period of mass starvation now known as The Great Hunger, which saw the death or emigration of almost a quarter of the country’s inhabitants – and in which weaving as a profession was a luxury that could scarcely be afforded.

Fortunately, the traditions of the craft were preserved in counties such as Donegal, Mayo, and Galway – which today are at the forefront of the revival of Irish weaving.

The Aran Islands consist of a group of three islands that lay off the western shore of Ireland. In the early 19th Century the Islanders were supporting themselves mainly by fishing.  By the 1890s, knitting was being encouraged on the islands by the Congested Districts Board. This body had been established to encourage economic growth in rural areas where the population had outgrown the productive capacity of the land. 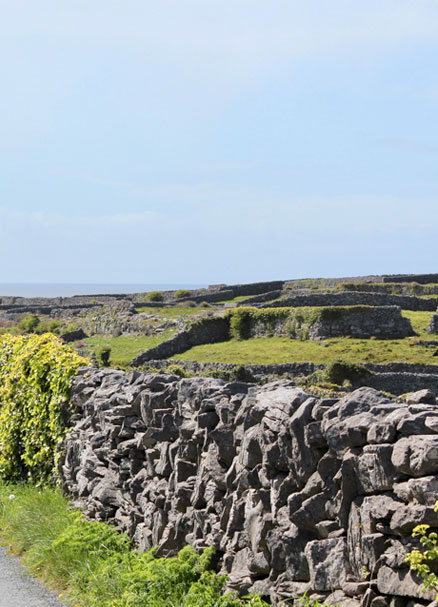 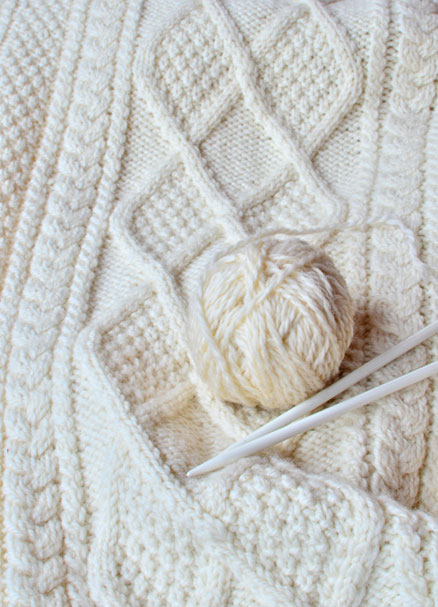 The Aran sweater is a hand-knitted garment, composed of vertical panels of cabled geometric patterns and textured stitches. On each piece of the sweater, there is a central panel, flanked by symmetrically arranged side panels.

Two women were particularly important to the enterprise, Nora Mhairtin and Anni Mullen. Nora was a well-known dressmaker and an exceptionally fine knitter. She taught complex stitches to neigbours and friends, and Anni, a master Críos maker, organised the knitters. On Inis Mor to this very day, descendants of these two women continue the art of producing Aran Sweaters. Martín O Flatharta is a great-grandson of Nora Mhairtin who farms Galway Sheep on Inis Mor and to this day still continues the tradition of knitting the Aran Sweater using Galway Wool. 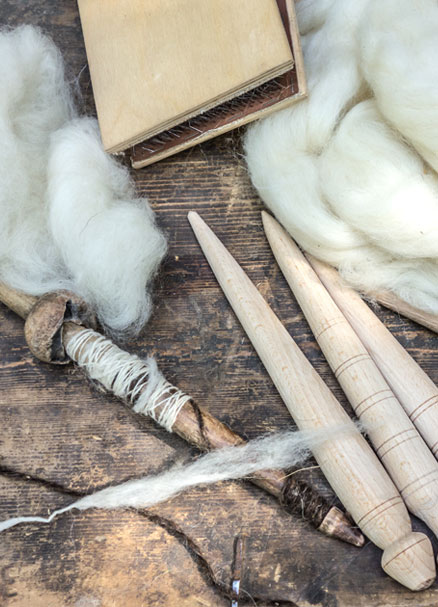 The discovery of the Aran sweater by the outside world came about when German textile historian Heinz Edgar Kiewe happened upon it in the “Country Shop” in Dublin in 1936. The sweater was being sold there in part by the efforts of Dr. Muriel Gahan who set about trying to preserve and protect the craftsmen of Ireland. Gahan was the founder of “Country Workers Limited” as well as the “Irish Homespun Society.” She also established the Country Shop to sell the local crafts to the public. In 1935 Gahan had visited Inishmore and asked to be introduced to the finest knitters in the area. She then purchased what sweaters she could and brought them back to her shop for resale.

From this beginning, the word was out, and the Aran Islands were on their way to spinning a reputation for developing this striking garment that has gone on to become an icon in the study of sweater design. (Deirdre McQuillan, The Aran Sweater, AppleTree Press)

The Galway Sheep & The Aran Sweater 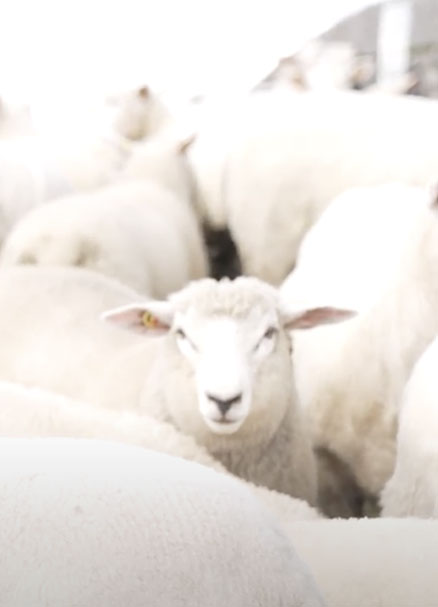 The use of heavy, undyed white wool for Aran knitting was sourced from lowland sheep known locally as ‘the white sheep’. In Ireland, these white lowland sheep were abundant on the limestone plains of Galway, Mayo, and Roscommon.

‘The Galway’ breed of sheep is formally recognised by the Irish State as a sheep breed native to Ireland. Sadly, in the early 20th Century the introduction of faster meat producing breeds meant ‘The Galway’ almost became extinct were it not for the gallant effort of the Galway Sheep Breeders Association www.galwaysheep.com

We use cookies on our website to give you the most relevant experience by remembering your preferences and repeat visits. By clicking “Accept All”, you consent to the use of ALL the cookies. However, you may visit "Cookie Settings" to provide a controlled consent.
Cookie SettingsAccept All
Manage consent

This website uses cookies to improve your experience while you navigate through the website. Out of these, the cookies that are categorized as necessary are stored on your browser as they are essential for the working of basic functionalities of the website. We also use third-party cookies that help us analyze and understand how you use this website. These cookies will be stored in your browser only with your consent. You also have the option to opt-out of these cookies. But opting out of some of these cookies may affect your browsing experience.
Necessary Always Enabled
Necessary cookies are absolutely essential for the website to function properly. These cookies ensure basic functionalities and security features of the website, anonymously.
Functional
Functional cookies help to perform certain functionalities like sharing the content of the website on social media platforms, collect feedbacks, and other third-party features.
Performance
Performance cookies are used to understand and analyze the key performance indexes of the website which helps in delivering a better user experience for the visitors.
Analytics
Analytical cookies are used to understand how visitors interact with the website. These cookies help provide information on metrics the number of visitors, bounce rate, traffic source, etc.
Advertisement
Advertisement cookies are used to provide visitors with relevant ads and marketing campaigns. These cookies track visitors across websites and collect information to provide customized ads.
Others
Other uncategorized cookies are those that are being analyzed and have not been classified into a category as yet.
SAVE & ACCEPT